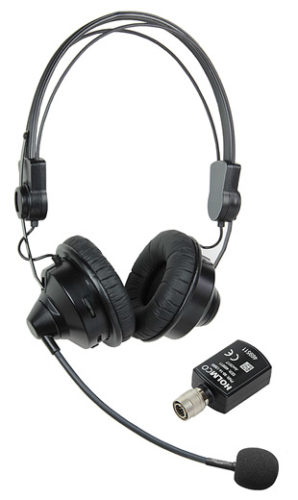 Wireless communication technologies are enjoying increasing popularity in the control-centre sector. They offer the user far greater freedom of movement and improved comfort.

Wireless connections can also make a communication system vulnerable, however, because people can listen in more easily. This is the main reason why they are rarely encountered in security-related sectors and are still viewed with great scepticism here. For sensitive applications such as these, for instance deployment with the police, special measures must be taken to protect the connection against unauthorized interception.

Since only relatively small amounts of data need to be transmitted over short distances, Bluetooth was chosen. This technology delivers a stable connection with low susceptibility to interference at reasonable cost. To make it fundamentally harder to intercept the audio signals, the transmit power and therefore also the range of the system were reduced. Further safeguards were implemented by modifications to hardware and software.

Each headset has its own Bluetooth dongle, which is connected to the call station. Headset and dongle are hard-paired in the factory. The user is unable to pair later with other Bluetooth devices, ruling out entirely any man-in-the-middle attacks during the pairing process.

In addition, 128-bit encryption is used on all audio data. The equipment software automatically changes the encryption key at frequent intervals, making unauthorized interception practically impossible. The permanent factory-set pairing ensures that the entire key length of 128 bits is actually always used for encrypting all data.

Another challenge proved to be the requirement for three-channel audio transmission. The control-centre operators need to be able to hear two audio sources separately on the left and right channel. So in order to be able to speak at the same time as well, three audio channels are needed. Standard Bluetooth profiles, however, permit only two channels to be transmitted simultaneously.

Once again a solution was found; rather than the standard functions otherwise offered by Bluetooth, the new Holmberg headset instead allows full duplex transmission of three channels: left and right earpieces and microphone. All the voice channels are transmitted in high quality (wideband speech).

The headset includes a push-to-talk (PTT) button and multifunction button, which can double as on/off switch and volume control. The flexible microphone arm allows ergonomic adjustment of the microphone, and can be rotated through 270° so that the headset can be worn with the mic on the right or left. If required, one of the earpads can be pivoted out of the way so that the user can follow any conversations in the room. The three-part head band guarantees that the headset remains in place without slipping, even with rapid movement of the body.

This project demonstrates that wireless communication technologies can be deployed even in sensitive areas without having to make unacceptable compromises on reliability or intercept security. In fact a solution has been found for the police that other emergency and security services might also consider.

Finally, in light of the very recently identified security threat to Bluetooth devices, dubbed BlueBorne, it must be mentioned that the project described here uses a microcontroller-specific operating system, ensuring it is not at risk from these potential attacks.